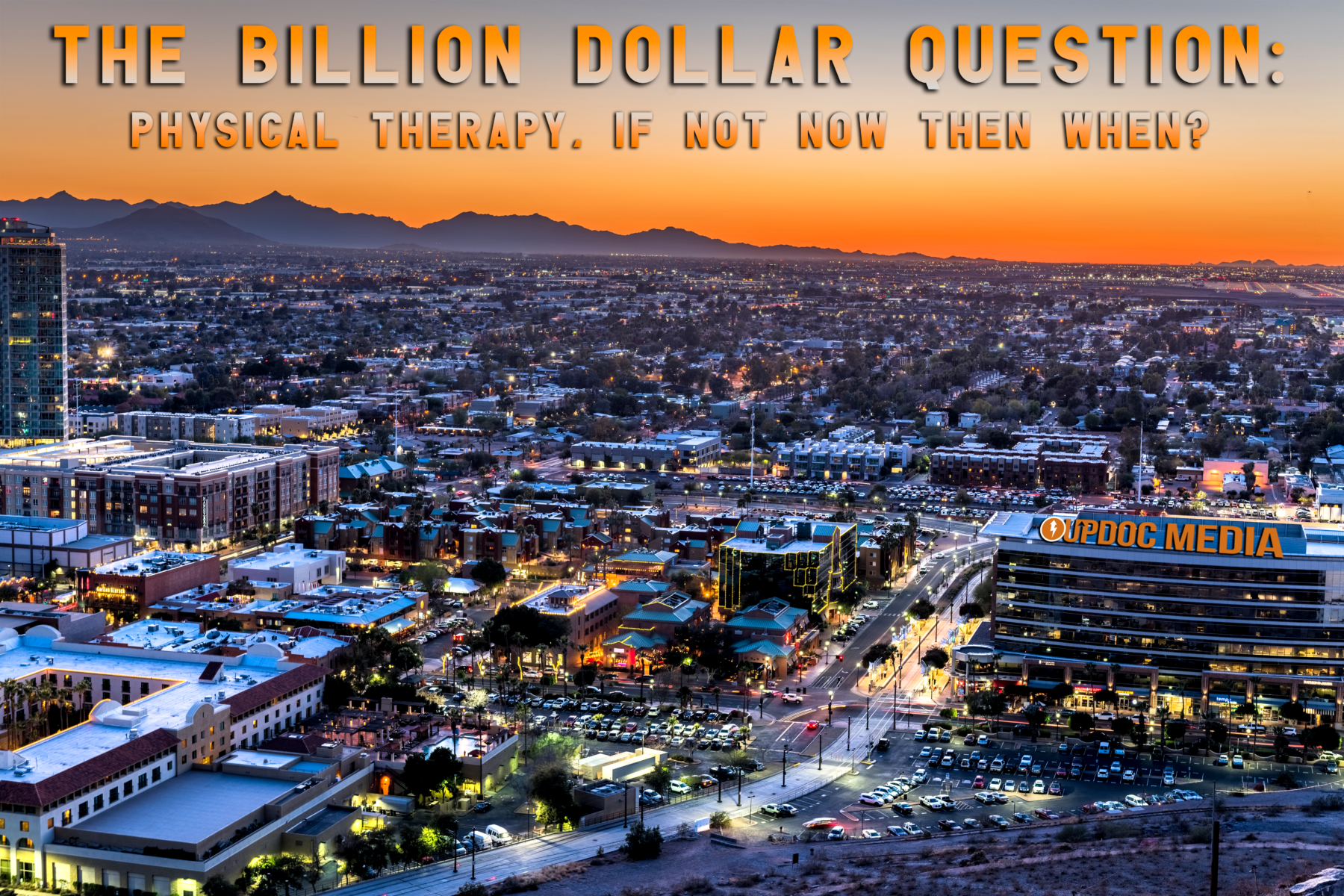 I recently attended Ascend, WebPT’s annual conference for rehab professionals. This year was special because it was in conjunction with WebPT’s 10 year anniversary. Celebrating milestone anniversaries are perfect opportunities for reflection. The problem with reflection is that it’s often a mixture of nostalgia and revisionist history.

The majority of my reflection happened on the 5-hour flight from Baltimore to Phoenix. I thought about when I started to attend conferences in 2008 (coincidentally the same year WebPT was born). I remember the excitement of connecting with like-minded professionals. In 2008 social media was still in infancy. Connecting and networking were much more impactful at conferences. The networking was great, the content and presentations, not so much. As I was sitting at 30,000 feet, I tried to recall sessions over the years that I enjoyed. Thankfully, turbulence shook me from that pain. After I woke up from a nap and wiped the drool off the nice person’s shoulder sitting next to me, I thought about WebPT.

I first attended Ascend 4 years ago. It was a tight, lean, and fast conference. The sessions were business focused and timely (see: relevant). Around that time, maybe a year earlier, I started to get to know Heidi Jannenga.

Around 2013, Therapy Insiders podcast was growing. We were launching new episodes every week with hard-hitting guests. These were authentic conversations. Never preplanned, and always unfiltered. The podcast scene was quiet (no pun intended) and we were unique in our message. We were business focused and frustrated with our industry. Turns out we weren’t the only ones.

I had one of my first, of many to come, impactful conversations with Heidi. I didn’t care what she and her company were making, what resonated was why she was doing it. I often have people telling me what they are passionate about. And yet, very few people exude that passion. Speaking with Heidi for 10 minutes leaves no question about her passion. What’s even more powerful is that her passion is woven to a vision. WebPT became our first sponsor. Heidi became a friend.

In the present, it’s time for our descent into Phoenix. As I get out of the plane, I know the time for reflection is over. It’s time to focus on the moment and plan for the future. Also, it’s very hard not to be present in the moment when it’s 106 degrees outside. SIDEBAR: you cannot justify 106 degrees by calling it “dry heat.” The locals attempt to tamper the scolding heat by calling it “dry heat.” For those of you that are not familiar with desert heat, imagine preheating your oven, then opening it up to place food in. That initial gust of heat that hits your face and feels like it’s burning off your eyebrows is “dry heat.” Now imagine that heat around you at all times. SIDEBAR OVER. Welcome to Phoenix. I, along with my business partner Ben Fung, arrived a couple days early and toured the newly moved into 60,000 sqft facility.

The new HQ, which is a converted warehouse, looks like a tech haven. This facility would feel right at home in Silicon Valley. And while this was a 10 year anniversary, there were scarce reminders of what was. Heidi and WebPT are much more focused on what will be.

After spending a day touring the facility and interviewing leadership it became crystal clear that WebPT is going all in to push the physical therapy industry forward. While bigger than ever before, Ascend still feels lean. In the best way possible. It’s a well run, detail focused event. The little things do not get missed. In other words, by attending Ascend you get a taste of what it’s like to be part of WebPT culture.

If you base the impact of a presentation on “OOOH” and “AHHH” reactions, then the starting keynote was the clear conference winner. The keynote speaker was David Elton. David is the senior vice president of clinical programs at Optum. He’s a health insurance executive. Hold your collective hissing, please. David shared some staggering statistics. The highlights of David’s presentation were data-based statistics on how much money physical therapy saves. Spoiler alert….A LOT. How much is a lot? Half a billion dollars. Yes, you read that correct (slide image below). However, the statistic that made the most impact is one that we should all be screaming from the rooftops. Ok, at very least tweeting and posting on Facebook. David referenced a yet to be published study, which was co-founded by APTA. This study, which I was told should be out Fall 2018, has one of the most critical statistics I’ve ever heard about physical therapy. It’s literally life-altering.

Study showed if you start with #PhysicalTherapy you are 75%-90% LESS likely to take opioids. This is huge. #AscendEvent— Gene Shirokobrod (@therapyinsiders) September 28, 2018

If that doesn’t get you excited to be a physical therapist and promote seeing a physical therapist, I truly don’t know what will. People are dying from opioids overdose at a staggering rate. Physical therapists can lower the likelihood of taking opiods by up to 90%! To me that was the most critical takeaway from the conference. But it wasn’t the only one.

Here are a few more takeaways from Ascend.

No one knows what we do

This seems to be a popular rally cry amongst the physical therapy profession. I heard this said countless times during the conference. While this may be true to some extent, a deeper look doesn’t prove it accurate. I’d say more physical therapists don’t know their own potential. Sure, people might not be keenly aware of what we do, yet they all know who we are. That point somehow gets missed. When is the last time you told someone you are a physical therapist and their response was “huh?” My guess is probably never. If you think it’s only semantics, you’re wrong. Hard dollars are backing this up. While we complain about insurance reimbursement going down (rightfully so, the complaining not the declining reimbursements…put your pitchfork down), volume is going up. More and more people are going to see physical therapists. Private equity firms are investing huge sums of money into the physical therapist industry. So where is the disconnect?

If you don’t have optimism, consider opportunism

Physical therapy is a $30+ billion industry. And growing year over year. Physical therapy school is tougher to get into than any other medical profession. Research continues to emerge showing physical therapy being one, if not, the most effective solution of most musculoskeletal issues. AND we only own anywhere from 10% (low back pain) to 25% (all conditions) of the market. In other words, there are still 75-90% of the population not seeing a physical therapist when they should. We are a $30 billion industry with 10% market share. That is insane. This industry is ripe for growth and opportunity. The beauty of it is that our growth benefits our communities. It’s a true win/win. So where is the disconnect?

The disconnect seems to be in the never-ending circular rhetoric that is prevalent within our industry. There is a lot of complaining, idealizing, and theorizing. And not enough willing to act, fail, and iterate in order to grow. Talkers take the most valuable resource we have: time. These people within our industry slow innovation because of fear. They may use other words, but ultimately it comes down to fear. Fear of uncertainty. Fear of autonomy. Fear of change.

Change is scary. Uncertainty is unsettling. Autonomy is powerful. While we’ve spun the rhetoric wheels for a while, the time for change is now. Being at Ascend was a firm reminder of that. WebPT is leading the charge. They understand that the industry needs to evolve and step up. But WebPT is not the only one. I had the pleasure of speaking with so many leaders working to steer their large clinical systems towards the future. These people own companies that have anywhere from tens to hundreds of clinics. They see where we NEED to go as an industry and they are willing to endure short-term pain for long-term gain. And even they are not the only ones. New grads, who are getting burned out from not doing what they sacrificed the majority of the adolescent life going to school for, are stepping up. They are willing to endure extra financial hardships in order to have an opportunity to make a positive impact on their communities. They are willing to act in order to have a chance to eventually recoup those financial hits. And all these people were under one roof because it was 106 degrees outside and no one wanted to be outside.

WebPT is a great example of what great culture, clear messaging, and relentless consistency can lead to. Our industry is on the verge of a similar success story. And we get to be part of writing a chapter of it.

Have questions or thoughts about the article? You can reach Gene on Twitter @therapyinsiders or via email gene@devbox.updocmedia.com.