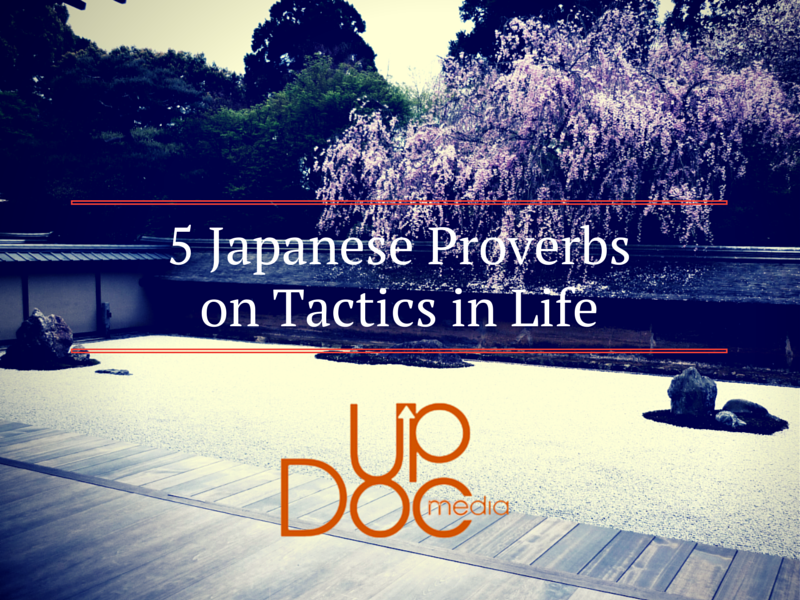 Miyamoto Musashi was a legendary samurai duelist who independently studied into an epic level of skill and understanding. Winning his first duel at 13 and retiring from dueling at age 29, this Japanese swordsman boasts over 60 victories. Now mind you, in the age and culture during Musashi’s time, the Japanese did not fight to first blood – swordplay was to the death. I think from just this fact alone, surviving 60 life & death encounters, there is much to be learned from his philosophies.

5 Japanese Proverbs on Tactics in Life 1. “The field of martial arts is particularly rife with flamboyant showmanship, with commercial popularization and profiteering on the part of both those who teach the science and those who study it. The result of this must be, as someone said, that ‘amateuristic martial arts are the source of serious wounds.'”

Musashi was obviously a man and mind far beyond his times. It was only in the last century that martial arts have truly become blended and unified into functional terms. Mixed martial arts (MMA), as we know it in recent times, has really taught us that things that look impressive tend to perform terribly. Another saying that I’ve heard of in this same regard: “Looks good, tastes terrible; looks bad, tastes great!” Seek to learn what works, not what is flashy. 2. “When your life is on the line, you want to make use of all your tools. No warrior should be willing to die with swords at his side, without having made use of his tools.”

I’d like to point out that Musashi was famous for using two swords even though, traditionally at the time, only the single long sword (katana) was used in Japanese combat. This struck me as an important philosophical point; Musashi practiced that which worked – even if it wasn’t popular or accepted. He studied and refined that which demonstrated repeated success. In life, it is important to make available and utilize every tool you have for every suitable advantage. If we are kind to our enemies, we are cruel to ourselves. 3. “When you think you are going to get into a deadlock, you stop that right away and seize victory by taking advantage of a different approach.”

We’ve seen this in large scale battles. Battle lines such as the Battle of the Bulge or any of World War I trench battles show how detrimental deadlocks are for both sides. If you find yourself in a mutual clinch of any sort, it is imperative to break the stalemate and immediately re-engage your opponent before they can react. If you stay, then your opponent will take advantage of your passivity in the clinch and will claim the upper hand. 4. “When you strike a blow, do not let your mind dally on it, not concerning yourself with whether or not it is a telling blow; you should strike again and again, over and over, even four and five times. The thing is not to let the opponent even raise his head.”

Once again, the holding down the pillow, snuffing out the opponent with pressure concept. I think this happens to many of us when we are at the moment of truth. In golf, it’s been said that we swing and miss when we take our eyes off the ball to see where it went. Keep on it and never lose focus on until the job is done. THEN take a look at where the ball went. In essence, you must keep up the pressure, the momentum, and the action until your enemy is beat. Otherwise, your opponent will be able to double back, regroup, and launch a counterattack against you. 5. “When an excessive number of sword moves are taught, it must be to commercialize the art and impress beginners with knowledge of many moves with a sword. This attitude is to be avoided in military science.

This goes back to the flashy style of useless schools of thought. I think this is highly applicable to all types of business, clinical, and academic philosophical operands. I find this particularly true for intellectual reasoning. Schools of thought that seem to make more of a situation than is truly required, as if such thoughts were above its competitors. Such patterns, I’ve observed, result in a xenophobic and elitist attitude. In the martial arts world, we see this quite frequently. Every so often, some grandmaster of a sub-branch of a school and style we’ve never heard of emerges. And yet, the school has many, many students. They square off with a recently promoted, say… blue belt from another school. The result? The functionally trained student wins the match and the flashy student ends up getting torn to pieces. Function is the basis of substance.