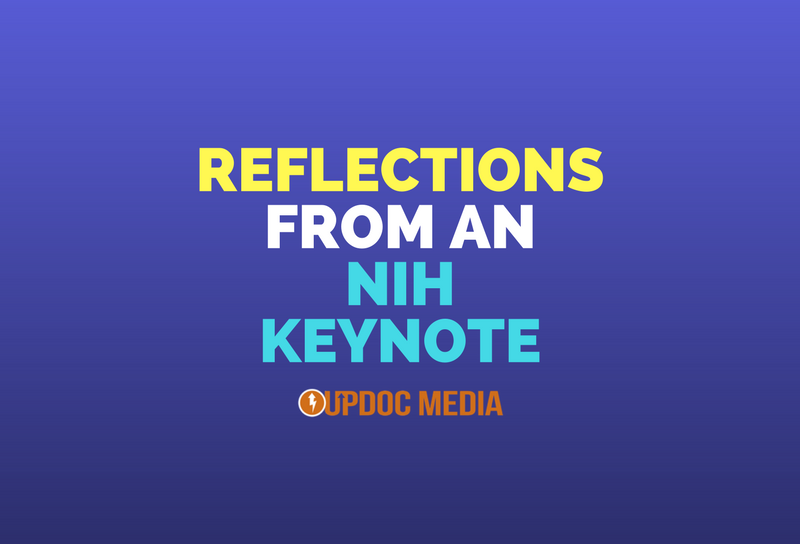 On August 3rd, 2017, I had the privilege of being one of two keynote speakers as an NIH symposium, combining Bioengineering and Interventive Cardiology. As a UCSD Bioengineering alumni and having recently spoke at UCSD career fairs and panels, I was approached about this opportunity which I was happy to accept.

Check out my Snapchat story of the day.

Attending the event were PhD students, post-doc fellowship researchers, and members of the interventive cardiology team at UCSD. Also attending were my own professors from back in the day. And, yes… I totally stared at them as they walked into the hallway, thinking: “Wow! There they are… the living legends of the Bioengineering.”

Funny enough, I share the same last name as the recognized godfather of all things biomedical engineering, the great Y.C. Fung. This was a common undergrad gag at the time — ARE YOU RELATED?!

In any case, as the day went on, I also served as one of the panelists for a round robin career fair/advice sit down. The questions were incredible as was the level of intellect amongst these individuals.

What was perhaps, even more insightful was how much I had to contribute! You’d figure, these people are the smartest folks in the world… literally. Yet, they still needed my help. WHY?!

It wasn’t that they had no personality and were stuck in their ivory tower. On the contrary, it was that they recognized their training was highly specialized and they needed to learn from sources OUTSIDE of their immediate profession. As a clinician with cardiopulmonary rehabilitation background in both practice and in teaching, we were all able to connect on an even deeper level. All together, it was truly special that myself and my fellow keynote, Leslie Bruce, JD, had unifying concepts to share to these innovators of the future.

1. Learn To Pitch An Idea

This was the phraseology used by Leslie, and, I loved it. So often in healthcare, science, and research, anything remotely resembling “sales” is considered a slimy pursuit. The thing is, selling isn’t slimy if you’re not peddling shady wares.

In truth, when done correctly, sales is presenting solutions.

This skill of presenting an idea and convincing audience members of its desirability is one that transcends all professions, all industries, and even all cultures. It’s the skill of communication. If you wish to excel beyond the norms of your profession and become a driver of innovation, learn to pitch ideas and learn to pitch them across the various stakeholder personas who you’ll need to take interest.

People make decisions based on emotions and gut feeling; they pile “evidence” behind those decisions, as to fuel their choices and to avoid dissonance or support self affirmation as a bi-product.

This is solidly supported by research in social psychology and cognitive science. More importantly, this is a simple fact of being human. Even the most logical and rational of minds will ultimately make decisions from the emotional centers of our brain. Why? Because, we’re wired that way!

One of my favorite speaking demonstrations is asking an audience group why the are NOT an Apple user and why they ARE a Disney fan. Typically the reasons against being an Apple user are very objective, centralizing on measures such as device performance and cost. However, the reasons for being a Disney fan and perhaps purchasing an annual pass have very little to do with objectivity and everything to do with FEELING. “It’s fun!” is the most common reason someone is a Disneyland AP. And, in the same vein… it is these emotional reasons that cause Apple to be one of the most dominant lifestyle companies — make no mistake, they may produce technology but they SELL lifestyle.

Hard skills, such as research competency, clinical outcomes, or something as simple as a low complication rate as a surgeon… such things are minimal qualifiers for every profession.

However, it is the soft skills that differentiate you.

Both Leslie and myself drove home the point that the ability to be a connector, to develop leadership skills, to have a solid understanding of business basic and management culture… these things are what will propel a career beyond its traditional norms. Such “soft skills,” much like water in the form of a tsunami, hit much harder than would mere one dimensional sledge hammer. There’s a force and depth behind personas that cause people to trust, to buy, to believe. It is for these reasons that I’ve personally have had much success in the realm of consulting for health executives and investors — because, quality is EXPECTED, connecting is an elevated experience. It is for these same reasons that consumers have faith in their choice companies & remain brand loyal — something that has be repeatedly demonstrated, beyond the top end quality products and services which we’ve all come to expect.

To be honest, this was one of my most nerve wracking keynotes to date… primarily because I’ve been out of the engineering game for quite some time. Oh, yes… also, that I’d be charged with the duty to inspire some of the most profoundly accomplished contemporary scientists — such as the one PhD who developed a pump small enough to embed into the heart muscle itself, bypassing the need for an LVAD.

Nevertheless, I was reminded about this very important lesson:

Everyone has something to learn.

And, everyone has something positive to contribute.

Keynote and public speaking will likely continue to be a big part of what I do; and, I’m honored and take it as a privilege as well as a heavy responsibility each time I share my thoughts to inspire the leaders of tomorrow.