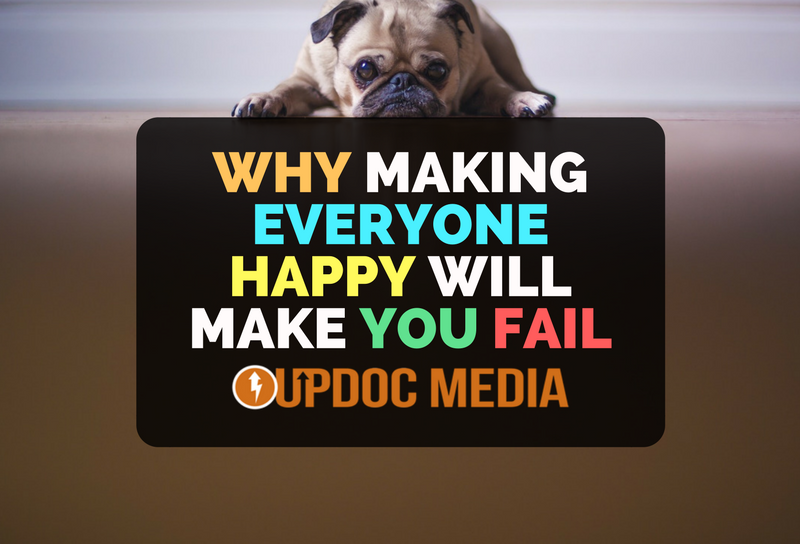 Especially in healthcare, there’s always this temptation to try and make everyone happy. However, this is one of the worst mistakes you could make; not just in healthcare, in your career, in business, and in life. Attempting to be everything to all will resulting being but adequate to a few. Whereas, being all to some results in satisfying all whom precisely who you aim to serve.

Why Making Everyone Happy Will Make You Fail

For this post, we will examine three case studies that are commonly used in business schools as prime examples of this “becoming something for everyone and ending up as nothing for all.”

In its heyday, Circuit City was one of the prime retailers for all things electronics, appliances, and entertainment. For quite some time, this was a perfectly successful approach to this space of business. However, as competitors emerged to disrupt through e-commerce vs. brick-and-mortar retail, Circuit City did very little to adapt to the changing landscape. Rather than being intentional and precise about their growth strategies, they merely attempted to make everyone happy: In contemporary business strategy courses, Southwest representation is typically found in context of going against the grain with tremendous success. The airline business is highly competitive one with enormous costs of operations, complex supply chains, multi-national regulatory concerns, and high levels of consumer expectations. Yet, despite all this, Southwest is known as one of the most friendly airlines with the lowest prices… a strange case where you get much more than you pay for.

How does Southwest do this? Well, first off: this company decided early on that not to make everyone happy. Southwest is not for 1st class frequent flyers nor experience based vacationeers. Southwest does not offer stiff professional boundaries and likes to joke around during their take-off safety announcements. They don’t compete for the high dollar; rather, they compete for the lower dollars. And, as a company, they are doing excellently.

Apple products are either loved or hated; there really isn’t any in between. If you aren’t an Apple fan, you probably have all sorts of very objective and measurable reasons why you don’t like them; such as how expensive their products are, how their products don’t have the best performing specifications, how their devices are barely even customizable, how their privacy settings are arbitrary, or that their interface is completely incompatible to every. single. other. platform… ever!

If Apple draws ire, they just don’t care. Not flippantly or rudely. Apple doesn’t care because YOU are NOT their customer. That’s right and that’s how it is.

And, it works. Apple is famed for leveraging the 80/20 rule to the max; and, in doing so, they are crushing their competition. They don’t need the entire market. They simply need for their market segments to be tremendously brand loyal; even if it represents a fraction of the total market potential.

Yep, Apple has been and continues to be successful in brand domination by focusing & being fearsomely precise on making only the people they want happy… to be happy. Of course, there are more sensible and obvious reasons why making everyone happy is a recipe for disaster.

First, it typically Destroys Productivity. On the business management level: By attempting to make everyone happy, standards are lowered or lost in an attempt to assuage temporary fixations of fairness or employee engagement. What is lost here isn’t the happiness factor; it is the performance factor as business units lose focus on the purpose and flow of business while typically obsessing over petty matters best suited for HR counseling.

Secondly, such an approach Rewards Mediocrity. With a loss or lowering of standards, under performance becomes ignored, tolerated, accepted, and even implicitly welcome. However, a team is only as strong as its weakest link. And, if that link isn’t being managed or coached into excellence, the team as a whole suffers. It suffers not only overtly due to declining performance standards; the team morale will plummet as their laboring efforts are not reciprocated nor rewarded since mediocrity is so very welcome by management.

Finally, by attempting to make all parties happy, such a strategy Positions Leaders as Untrustworthy. Having sabotaged a team’s ability to maintain any semblance of productivity; and, now perfectly willing to celebrate any contribution, no matter how mediocre, leaders of such teams that set out with a mission to “make everyone happy” ultimately become seen as untrustworthy, incompetent, and unfit for the job. While not necessarily the origin of this mess, the leaders will ultimately take the blame with successors to only inherit a systemic problem of trying to make everyone happy.

This cycle of failure only ever breaks when key leaders take a step back and precisely refocuses the company culture back on the purposeful task at hand, rather than the feeling of happiness for all.

“If you’re not pissing someone off, you’re doing something wrong.”

The truth is, if everyone is “happy” with you… that’s a terrible sign. In this case, either no one is listening or nobody care… and, I’m honestly not sure which one is worse.

Whether it’s business, career, marketing, academics, social circles, or life in general; the best results occur when people are 100% intentional, purposeful, and precise. Trying to satisfy all is the very definition of a shotgun approach when life is more about precision riflery.

So what, if you fail to hit every target out there? Be happy you did. More likely than not, you made the marks you aimed for. Furthermore, all the available marks you are able to hit, aren’t exactly the best for you to do so. Bad job offers, terrible contractual arrangements, and incompatible partnerships are only some of the nightmare scenarios that are commonly found when “making everyone happy” becomes the primary goal.

Therefore, if you aim for success; be purposeful – be precise. There will be unhappy remarks along the way; far outweighed by true achievements and a multitude of appreciation.