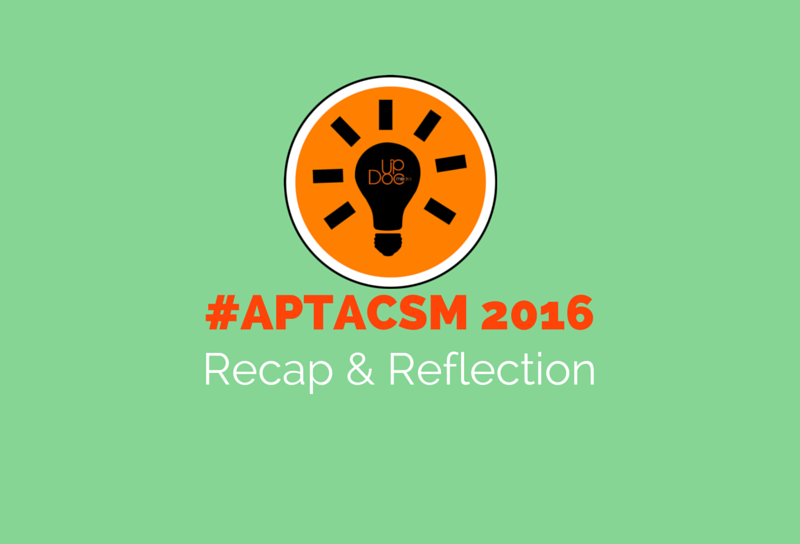 Attending the APTA’s Combined Sections Meeting (#APTACSM) last week made me look back, reflect, ruminate, and make many plans for the future.

As I was reminiscing on how my career path as a Physical Therapist unfolded, I realized several “would’ve, should’ve, could’ve” moments. The first, I wish I would’ve gotten more involved, if I knew how much value there was. The second, I should’ve gotten involved EARLIER in my career path. And, finally, I could’ve gotten so much more out of the early years of my career… if only.

Well, I am truly pleased to share that CSM 2016, was by far one of the most millennial oriented physical therapy conferences to date. And, students and fresh professionals alike… they were ENGAGED. Still, we need to get MORE of them engaged.

Last year, I had perhaps the biggest #FOMO of all time for CSM. Don’t believe me? Check out this tweet:

And, I had goals. Jerry Durham swore it’d be his last conference and I wanted him there because I knew I’d be there. Well… he came 😉 #KABOOM! Not only did Jerry show up, he brought with him a show stopping earth shaking first ever patient panel! If you missed it, you definitely missed out on something truly significant.

I also wanted to sponsor a student to attend. Well, while that didn’t happen as I wanted it to, I was able to help put together a guerrilla seminar on business for #DPTstudent(s)… which was nothing short of amazing! Amazing, because of their drive, willingness to become more, and mindset bent on challenging the status quo.

Finally, I wanted to lead a #DisneyPT takeover. Well, it kind of happened. I ended up getting into the park late, racing up Main Street USA… trying to get ahead of the parade to catch a group of students before I got cut off by the parade itself… all before my next business meeting… which was happening in 45 minutes. Mind you, it takes at least 15 minutes to get from shuttle to parking lot.

Well… at this picture captions:

I almost made it join them for It’s A Small World. Sadly, I was but 4 boats away… there they were… sailing off without me. Fortunately, I was able to show them the secret line for Dole Whips. We darted it between Small World & the Tiki Room in the rain… got them into the line… then ran back to the shuttle to pick up my partner in crime for yet another business meeting.

All in all, a definite win 😉

Last year, I gathered from afar that CSM 2015 was the year of passion. As a profession, we were trying to find ourselves again. It was very introspective… trying desperately to become more self-aware.

Well, this year, CSM 2016 was all about action. Action is everything. Without action, nothing gets done. And, perhaps the most significant action taken this year is our renewed focus on our patients… our customers… their perspectives, their needs, their desires, their goals.

“Talk to your patients about their priorities… keep talking to them. Priorities can change.” @LISAMACNCHEESE#APTACSM#patientexperience

This year, I sensed, felt… an energy in the air that all the 10k+ attendees were there to DO SOMETHING. It wasn’t so much about the learning (which, of course, is excellent), people were aching to take action in meaningful ways, in new directions and with a renewed purpose.

What I saw that REALLY impressed me what how action oriented the students were. Students were dragging each other to all sorts of things; making them join Twitter (which, in my opinion, if you aren’t already on Twitter… you are WAY behind), join advocacy groups, seek out mentorship, seek out professional development avenues, you name it… action was core of the conference.

Thinking about this, it gives me much satisfaction. In our guerrilla seminar for DPTstudents on Business, Mentorship, along with a hefty Q&A time… one thing I shared was this:

High heel damage marks we talked about at #APTACSM#DPTstudentSeminar! #dptstudent

I found it as nothing short of fortune and fate… stars aligning, that CSM was held in Anaheim because of Disneyland. Walt Disney found himself bumping into failure after failure until he finally came to his Mickey Mouse moment. Still, as a bonafide success, opening Disneyland was going to be a failure. All the reviewers reported that opening day at Disneyland was the worst ever.

The picture above depicts part of the story I shared. Disneyland was incomplete on opening day. Concrete was still drying, leaving high heel damage marks; there was a plumbing strike, broken rides, counterfeit tickets, and a host of all sorts of other failures. Most theme park business experts felt Disney should simply close down. BUT! He didn’t.

He turned failure into a lesson. Lesson into action. And, action into success.

I shared that at CSM, gathered together is a host of pioneers, leaders, and those who wish to take up the mantle and have the baton passed to them. Lessons are here, at CSM, in abundance. It is up to “us”… all of us, who are present in this profession to take those lessons, add them to our own, and… to take ACTION.

Ultimately, action is the precursor of success.

And, if we are to transform society — we must act!