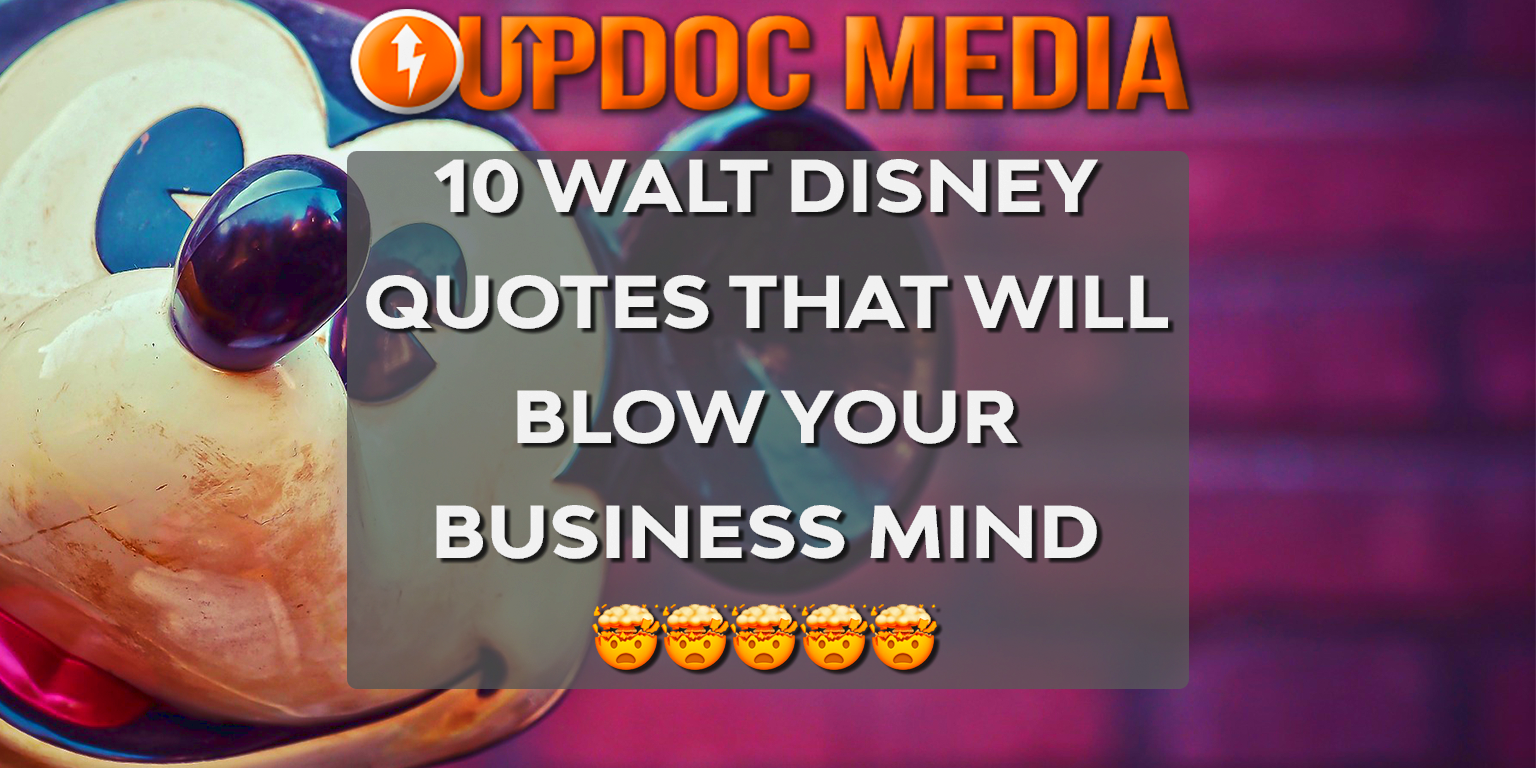 Last week, the 2nd week of February 2018, Gene and I hustled for an international consulting client in a marketing and business development intensive. This required much travel — and with that, ample time to study the mindset and philosophical working framework of one of my favorite innovators of all time: Walt Disney.

So, without further ado…. here are…!

10 Walt Disney Quotes That Will Blow Your Business Mind

The following quotes are from the book: The Quotable Walt Disney. As usual, the quotes will be bolded in no particular order; and, my impressions in italics. Enjoy!

1. “In learning the art of storytelling by animation, I have discovered that language has an anatomy.”
Over the years, we’ve truly seen this throughout all formats of media productions; even so popular as terming the anatomy of certain stories into phrases as familiar as “The Pixar Pitch,” to which one of our podcast guests, New York Times best selling author Daniel Pink, is quite fond of.

2. “We are not trying to entertain the critics. I’ll take my chances with the public.”
This is a HUGE commentary, especially in healthcare — not to mention within physical therapy. All too often, health providers aim to impress each other, rather than to impress their “public” — their customers. If every physical therapy practice in every setting were to shift their media outlets to public facing content, we would see a massive shift in public awareness and opinion of physical therapists.

3. “Until a character becomes a personality it cannot be believed.”
I love this quote. I love this quote because Disney showed us that we can believe in fantasy — that it can be very much as real to us in our hearts and minds as real life. How much more so is the case when, we as healthcare providers, literally save and change lives… every single day?! AND… have the ability to share such stories? We need to stop thinking about ourselves as statistics, credentials, degrees, and our slot on the healthcare-command-tree-totem-pole…. we need to start regarding ourselves as personalities to be trusted.

4. “When I started on Disneyland, my wife used to say, ‘But why do you want to build an amusement park? They are so dirty.’ I told her that was just the point — mine wouldn’t be.”
If you want to do something truly valuable, worthwhile, and of high value to the public — do it right, do it differently.

5. “We did it, in the knowledge that most of the people I talked to thought it would be a financial disaster—closed and forgotten within the first year.” (On Disneyland)
Sometimes, you just need to do you and live out your truth. Surrounding its launch, Disneyland was widely considered one of Walt Disney’s greatest flops… criticized from all ends before, during, and after opening day. Still, we can hear his healthy chuckle as Disney parks thrive across the globe. It wasn’t about financial health or disaster — it was about dreams, and making them come true. (And, for those of you reading this with cynicism… “You have my pity” — Buzz Lightyear; and… “That, is why you fail” — Yoda.)

6. “Some people forget that you can still do good work even though you work with dollars bills.”
There’s been this weird shift in business values in the last few decades where terms such as “corporate greed” and “the little guy” as well as other similar terms and thoughts in this vein seem to be so severely opposing, negative, and conflicting in nature. One of the most valuable lessons I learned in getting my MBA was that some of the healthiest companies in the world are as such because they are run by value sets in a socially responsible way. Walt Disney knew this years ago; it’s a good time for us to remember this… and, perhaps, get our minds AND companies back on track.

7. “Recession doesn’t deserve the right to exist. There are just too many things to be done in science and engineering to be bogged down by temporary economic dislocations.”
This quote struck me so strongly. Walt Disney lived through the Great Depression; and, it’d be safe to say he and the Walt Disney Company thrived in the face of it. During a time when nothing was growing and everyone was struggling, Walt took this entity within the entertainment industry — a non-essential — and blossomed even at the cost of the “first ever full-length animated musical feature at the cost of $1,499,000.”

8. “Crowded classrooms and half-day sessions are a tragic waste of our greatest national resource—the minds of our children.”
Here’s something you may not know about me: I struggled in school… a lot. Part of it was just me being me; the other part was the ADHD… it was only called ADD way back in the day. Oh… and, I nearly failed out college, receiving academic probation in my 1st year. Surprised??? Well! Would you be even more so surprised to know that I graduated with both my Doctor of Physical Therapy degree and my Master of Business Administration with honors/distinction? Yours truly, is a personal example to the truth Walt Disney already knew generations ago… minds learn through action and by experiencing life. We need to change this highly theoretical learning environment that classical education has evolved into… and, morph it into contemporary & cutting edge approaches that help launch both careers and young lives for their best chance at opportunity and success.

9. “Instead of considering TV a rival, when I saw it, I said, ‘I can use that; I want to be a part of it.'” —— “The growth of television as a medium of mass communication among people around the earth cannot be halted, nor much longer delayed.”
I can already hear it now… Walt Disney would’ve said the same thing about “the Internet,” AOL/NetZero/Cable-vs-Dial-Up, websites, forums, social media, chat apps, etc. etc. etc. Walt Disney always had a growth mindset — he always sought ways to involve, invite, and integrate… THAT is why he was so powerfully disruptive. It wasn’t about losing less… it was about building more.

10. “Because the eye is the most sensitive and dependable of our sense organs, the motion picture offers the widest, direct avenue to our emotions. Whereas the still picture can suggest only a fragment of fact or fiction, the cartoon-in-motion is without limit in communicating ideas, events, and human relations.”
We close with this quote because of where we are now with contemporary technology. Camera and touch screen functionality are all but daily norms in our lives… so much so that toddlers playing with smartphones is as common as bullfrogs eating bugs on an iPhone <== yes it’s worth the watch 😉 . The reason this resonated with me is that, as minds of clinical science, we often think in terms of facts and statistics. However, our most important resource — our customers — they think in terms of human connections through stories… what they can see and touch and hear… what they feel. We MUST learn how to connect on these levels… or, continue to sacrifice our futures to a bureaucracy which has become a mind of its own… not resultant or attributed in fault in, by, or of any individual or entity… but, a process that healthcare consumers are not invited to nor encouraged to participate in — that, is the real tragedy we must resolve.

Almost every business school program highlights Disney or the Walt Disney Company in some fashion in relations to innovation, marketing, corporate culture, and/or talent acquisition. It’s pretty much incredible as an icon of modern times — even influencing contemporary business in ways we are still discovering to be in effect.

So with that… I hope you’ve enjoyed this Feel-Good-Friday’esque post — looking forward to seeing you all at Combined Sections Meeting, to which… don’t forget about our Secret Presentation Event. AAAAAAND… be prepared for a CSM special release of a Job Market Pulse Update!

PS. In case you’re interested in learning more about UpDoc Media consulting, we have a specialized physical therapy practice business intensive. If you’re thinking about getting your practice back on track and elevating your company to the next level, you definitely need to take a look!