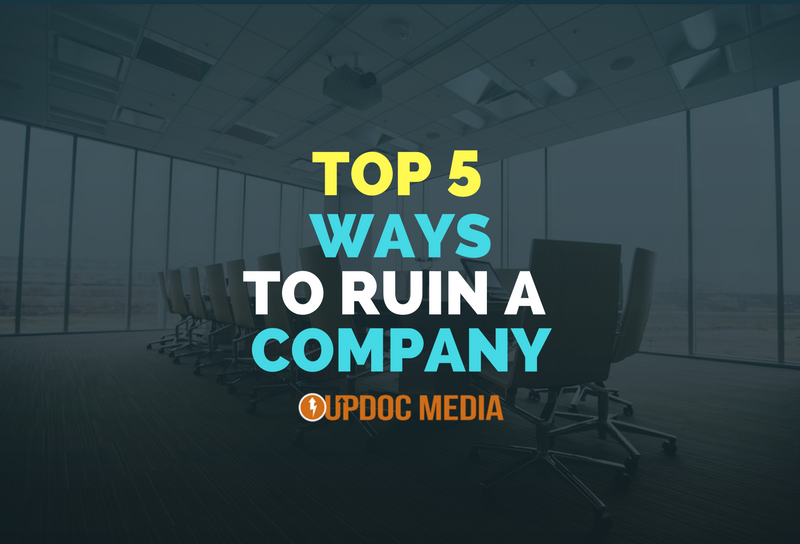 Companies are built upon people; people who are organized together and work efficiently as teams. There are end-user facing team members, leadership, management, support staff, contractors, ancillary services, specialists, seasonal staff, and more. No one element is more important than the other; they simply play different roles. Ultimately, it is the team and the timing of business within the market that lead to long term success… or, failure. Organizations sink, swim, soar, or come crashing down based on five prototypical people problems.

1. Turnover.
Turnover is a universal issue. The average turnover rate in the United States is 15% annually. Moreover, the associated costs to replace a single position is typically 15-30%+ of that position’s annual salary equivalent. However, for various industries and levels of leadership/management, the cost to replace can easily be 200%+ of annual salary equivalent.

However, turnover itself, isn’t the enemy that ruins the company. The enemy is: Lack Of Talent. Lack of talent causes “bottom up pressure” toward management, which then, causes staff-level-management to take on far more responsibilities, burdens, and pressures than typically required or expected. When not quickly rectified, this quickly leads to inefficiencies, frustrations, and ultimately burnout of each subsequent level of management. In bad cases (which are terribly common), turnover waves can actually lead to a domino effect leading to an huge change in organizational structure — and, not for the best.

The Solution: To beat the odds in turnover, companies must invest in talent. It’s not just about a competitive compensation package. It’s about creating a culture that attracts talent and empowers talent to grow into their own and into the organization. It is only when employees buy-in to the organization as an identity that they care deeply enough to help plan successful legacy strategies when turnover is imminent (because, it is inevitable). The way to beat turnover isn’t to prevent it; it’s to prepare for it.

This, is sad and true. Micromanaging a team; be it a team of frontline staff, a team of managers, a team of directors, or even the c-suite… micromanaging is always damaging. Frontline staff who are micromanaged feel no purpose in their work; that their only responsibility is to be either robots, lemmings, or to tow the company line. Typically, there is a lot of fear and distrust when oversight occurs over the frontline.

When micromanaged, staff management feel sandwiched from both sides. They feel a duty to protect their team; yet, powerless to advocate for them against their own bosses. They are told “how to do their job;” and, feel powerless to pursue performance goals in the best ways they know how… which typically, are NOT the ways which middle management is “suggesting” for them to do.

Then, there’s middle management. When middle management being micromanaged, bad things happen; typically in the form of sabotage and/or stagnancy. Both, which are eventually destructive if not fatal to an organization.

Finally, upper management up through the c-suite. When this level of an organization gets micromanaged, cultural shifts can occur overnight when these leaders have finally had enough. Or, it could be the case that they are forced to resign despite their honest efforts to do good by the company, its board, and its stakeholders. All to say, again: micromanaging is damaging.

The Solution: Empower an agile and inspired culture. As former Apple CEO Steve Jobs is famous for saying…

Slow response to change, ineffectual improvements, and lazy strides towards excellence will only cripple a company. However, a company that empowers its teams to pursue excellence will not only thrive… it will soar!

3. Gossip.
The internal ruckus of gossip is like a a wrench thrown into a well tuned machine. Gossip makes the workplace a hostile environment and creates a focus on the social dynamics, rather than goals of business excellence. Gossip typically occurs for reasons beyond personality clashes. It typically occurs due to employee disengagement; systems and situations which have repetitively fostered the promotion, adoption, and perpetuation of the wrong things… typically, mediocrity.

The presence of gossip means that employees have plenty of time to gab, rather than work. To quell this, managers typically resort to mediators and peace makers; wasting inordinate amounts of time and resources to try to get what would otherwise be reasonable (and, professional) working adults to “play nice.” This is typically cyclical and will not only hamper the efficiency of the company; it can completely derail the company culture, extending ripples of damage which can cause turnover and worse. Again, all this simply highlights systemic issues at hand; to which, the remedy is also systemic by nature.

The Solution: Gossiping occurs because the wrong ideals and behaviors are rewarded. You can’t fight fire with fire in this case. After all, the old saying goes:

“Never wrestle with a pig. You both get dirty, and, the pig likes it.”

Rather, the solution exists by out-competing gossip with the right ideals, by rewarding the right behaviors. A company must utilize this principle by giving no incentive for gossip, rather all the best incentives for excellence, unity, and mutual success. At this point, nobody will have time for gossip.

Hiring is a huge concern these days. In fact, for two years now, it has been expressly stated by the private practice world that finding good people — is the single most challenging business concern.

Hiring the wrong person may mean that they are an excellent clinician, being placed into a questionable managerial role. Or, it could be that a talented leader is being sent down a clinical specialist track when they should be groomed for management.

The worst case, of course, is when a seemingly great candidate is quickly hired in to “fill a spot.” After the probationary period, this person lets loose and turns out to be a nightmare for the company. Be it any of the above listed company killers, this person is just a toxic mix for the company at hand. The irony is, they were the all star performer in the company before. Again, all this speaks to the importance of fit.

The Solution: When hiring is required, don’t be in a hurry. Be sure to vet every candidate and be severely choosy about who you let into your team. Many companies are starting to use phased interview processes where the hiring manager performs a one-on-one, a team of future colleagues perform a panel-style-interview, and a sleeper observes the prospect during “off stage” environments such as the waiting room, an established secret shopping routine (pre-,post-, or during active interview sessions), or is sent to observe at key points during a facility tour. Whatever the case, trust the impressions of the established culture rather than the references on the resume. Besides, most resume references are positively biased.

Also, consider a long term solution of not just who enters the company; but also, how they are integrated, groomed, cultured, and set up for success. Ultimately, hiring the right person is also a balance of making sure that they continue to be the right person for the company.

5. Inheriting problems.
Just as management “administrations,” “dynasties,” or even “eras” change, topple, and are replaced, companies commonly face inherited problems both in-micro, within its own departments and teams… or worse, in-macro… status-post-merger.

When a manager inherits a problem, knowingly or unknowingly, they are typically set up to be a short term solution to solve that problem and then begone. This, is the sad fact for many organizations. What this really means is that the organization does not have long term solutions in dealing with its internal dysfunction and relies up on “new blood” to be sacrificed upon the altar of “cleaning house.” This type of organizational behavior is common place for companies that tend to be top heavy; where management keeps everything close to the chest, everyone is on a need-to-know basis, and transparency is basically non-existent.

The patterns are clear. Every couple of years, a staff or mid-level manager resigns and a new one takes their place. Upper management then sees this as an opportunity, and therefore, tasks the new manager to fix some issue which isn’t fully disclosed as a systemic problem. As such, an “HR problem” gets fired by this new manager. Or, a new policy is put in place. Or, old perks are reneged. All very negative experiences for everyone up and down the chain of command. The solution is quite opposite to these occurrences.

The Solution: When a problem is inherited, discovered immediately or uncovered far in the future, best practice dictates complete transparency. A problem within the company is a problem for everyone in the company as well as all stakeholders involved. If it is a departmental issue, it’s best for the manager and the manager’s superior to openly converse with the team affected; offering a select array of solutions (all which will address the problem) for the team to autonomously choose. If the inherited problem transcends company business units, it is best to first get the business units’ leaders involved; then, to communicate in unison to both sets of teams. Again, an amicable array of solutions must be drawn up for a majority selection. However, should there be no reasonable choice; or, if better, a team member offers a superior solution… it is CRITICAL that management fully acknowledges *AND* considers the solution proposed. The worst thing a company can do is to ignore the ideas of its most valuable resource: its people.