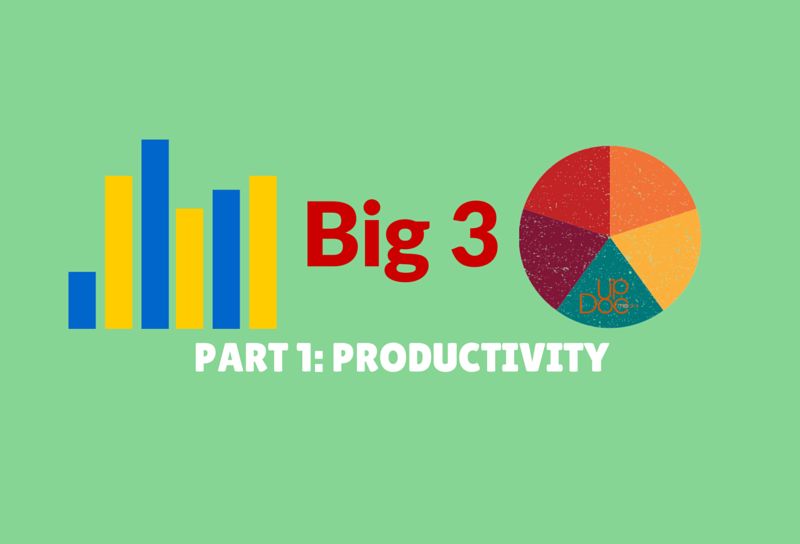 So, just in case you missed it, this week’s blog posts will revolve around a primer from last week on Productivity vs. Production. This week, I aim to address the curse of the Big 3 of Physical Therapy: Productivity, Turnover, and Marketing. So…! Let’s get on it! In the primer post, I made the case production should be the goal operand of healthcare businesses.

Production makes us money and productivity just makes us stressed out!

Productivity is usually measured against time and with hourly pay the widespread norm for employee compensation throughout healthcare; it makes productivity into a huge stumbling block. While some health services are time dependent, the over-arching problem isn’t necessarily the time involved to complete the service — it’s the fact that compounding this with hourly pay framework creates two operational risk factors for one input of revenue. THAT, is never a good thing.

And, before I move onto production solution, let me go into just one more rant… I mean, reason; yes, reason, why productivity is plain ridiculous.

For many inpatient settings, physical therapists are judged for their productivity by how many minutes they are in direct, billable patient care against total facility time. If they are billing for 6 hours of care and they are working 8 hour days, then they are 75% productive. However, this can mean a lot and it can mean truly nothing. In a SNF setting, it doesn’t necessarily correlate to the quality of revenue production. In a hospital setting, it could very easily mean an employee is taking a very slow paced evaluation to grab a quota of units — the same evaluation which could have been effectively finished in 20 minutes. Yet the opposite can be the case. 75% productivity could mean that a clinician was hustling at a million-miles-an-hour, running up and down stairs, checking on unit after unit; blocked at every turn with patients in radiology, medically unstable, refusing care, awaiting medications, delayed for breakfast, and all other kinds of reasons which a clinician cannot control. Annnnnnd, there’s the possibility that a physical therapist was 100% productive and saw 8 patients for the day. Contrast this with a clinician who could be 80% productive, seeing 16 patients for the day and bringing in several hundred more dollars of revenue into clinic than the PT who was at 100% productivity. So, yes, productivity is a poor reflection of actual production and value contribution.

So, let’s talk about the Production Solution!

The deeper issue which we must root out of “productivity” is this: Being paid by the hour means that TIME is most valuable. However, in service industries, time means only so much. What matters most is service! SERVICE initiation, SERVICE experience, SERVICE completion, SERVICE quality, and SERVICE satisfaction.

Service industries need to be fully obsessed with the production of their services. A company’s operations, supply chain, resources, processes, strategy, finances, and corporate culture needs to resolve around the production of service.

Especially in the case of healthcare, relying on “productivity” is a terribly mismatched guide rail in trying to sustain, if not rescue, this ecosystem that now represents a trillion dollar economic concern not to mention the livelihoods of so many hundreds of thousands of professionals and their dependents. If managers, owners, businesses, and health systems wish to boost productivity, what they really need to examine is the revenue framework and how it relates to their supply chain in service production.

In the case of a single standing clinic, the more units billed for, the more production is happening and the more revenue a business will realize. However, at an hourly rate, there exists very little positive incentive to produce more. It can already be stressful enough to attempt managing factors which an employee cannot control, produce services, and document/bill for said services… all to keep productive enough to be considered a “good employee.”

Let me offer this…

Instead of judging productivity, judge through the lens of production. Let production at base value be the measure against which employees are considered productive or not productive. If an employee is an excellent service producer, give them positive incentive to do so in the form of better pay. If an employee is a less than stellar producer, give them negative incentive to remain so, and/or, performance such an employee up or self-selected-out.

After all, if an employee is getting paid no matter what — by the hour and just by being present — what incentive is there to produce more? However, if an employee is paid for, in proportionate fairness by what they produce, then there is all the incentive in the world to produce more. And, there is also all the incentive in the world, to avoid being a weak producer as such a case would mean proportionately less pay for said employee. AND! The pressure of production measured by time is alleviated, allowing clinicians to do what they love best — provide excellence care.

Again, I’ll wrap up this post with the same graphic I shared from the primer with some expanded discussion. After all, everyone always needs validation by the numbers and by the dollar: This graph above is based on real clinic data; with the blue line representing the traditional hourly pay productivity standard and the orange line as one of many value based models. In this case, Tiered Profit Sharing is the value based framework.

You can quickly appreciate the sudden drop off at 85% for the 8 hour productivity equivalence in the traditional financial model since most employees have a hard time (for the multitude of reasons said above) to breach into the 90s. A missed goal which constantly pains most managers and business owners.

In contrast, the orange line represents a Tiered Profit Sharing model where production levels equate to pay rate. The more a clinician produces, the better they are paid. If they produce less, their pay reflects as such. No matter the case, the business is kept financially protected against sub-standard production levels in some fashion. This type of insulation is available under value based pay in a manner which is not available to businesses under the hourly pay framework. And, unlike hourly pay, high producing clinicians get a higher pay rate for “extra” production which captures the unrealized revenue potential coveted by so many clinics at the 90%+ productivity equivalence.

It sounds good, right? Get paid for what you produce.

The clinician wins, the customer wins, and the business wins.

Again, all this requires change. It requires businesses to step away from hourly pay and start integrating value based systems. After all, our payers are already merging into that direction, shouldn’t we as well?! It also relieves clinicians who care more about producing excellent service from the pressures of time. When time is taken out of the equation and both the quality of care as well as the quality of pay are in sync, the system is the aligned for both financial excellence and service excellence — this, is good business practice.

If you are interested in creating change, it is typically best to make change in parallel — through pilot programs. Such avenues of strategic & innovative change requires an entire volume of its own address. Nevertheless, if you’re interested in being at the leading edge, please let us know! We are here, and, we are happy to catalyze your accelerated success.