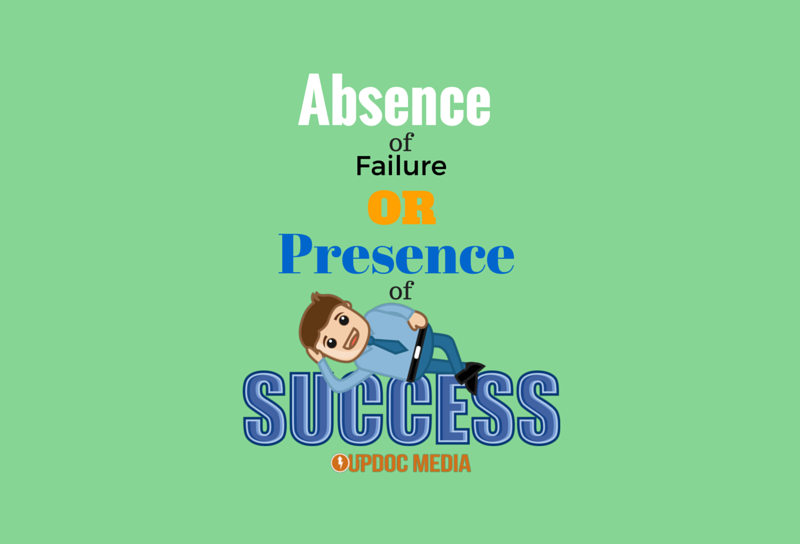 Success is a funny thing.

It needs to be defined.

It needs to be measurable.

And, we all want it.

Absence Of Failure vs. Presence Of Success

So, this post comes out of a conversation I was having with my mentors about people I’ve been mentoring. And, it struck me in this conversation that the “school” (the educational culture) has programmed  many of us to appreciate “success” in the most backwards of ways. In essence, school has taught “us” to see success through a student’s mindset.

The problem? The student’s mindset sees success as an absence of failure.

Students typically see the world through making the grade or GPA… passing. This means that one cannot make marks or get grades below a certain percentile, or miss a certain number of questions, or lose a certain number of points. For a student, the point or goal of achievement tends to be synonymous with avoiding thresholds of failure. And, what is worse, the student’s mind is primed for high performance.

Getting Bs, As, and even As-in-the-high-90s of percentiles become a common experience in a culture of overachievers. Now, this alone isn’t a bad thing.

It becomes bad when this mindset carries over into business and in life.

As UpDoc Media co-founder Dr. Gene Shirokobrod likes to say, success is like baseball. If you’re successful 30% of the time, then you’re successful. It also means, it’s okay to fail 70% of the time. And, if you don’t have the presence of those 70% of failures, you would have never learned to do what is necessary to make that 30% to begin with.

Edison went through hundreds of element trials before he got his lightbulb to work.

Certainly, in life there are things we definitely want close to, if not, perfect — things like 6 Sigma for healthcare? Definitely! However, in business and in life we need to move beyond expecting to exist in the 90s, 100s, or even the emotional appreciation of extra credit.

Extra credit doesn’t exist in business and it certainly does not exist in life.

As a point of fact, there are many businesses that consider low teens and even single digits to be a huge success. Imagine if a business grew 10% every year. They would double their size in just eight years by doing nothing differently at all. THEN, imagine if they were to accelerate their success and grow their growth. That, is when things get crazy.

But, one cannot get there without appreciating the presence of success and the failures that come with it.

It’s important to reframe that student’s mindset to focus on the PRESENCE of success. It’s positive vs negative, present vs absent, constructive vs destructive. You want to be of the positive valence. People are drawn to positivity; it’s magnetic, electrifying, and wonderfully contagious.

If you want success, make sure your mindset matches your goals to achieve. Aim, not for absence of failure.

Aim for presence of intentional excellence.