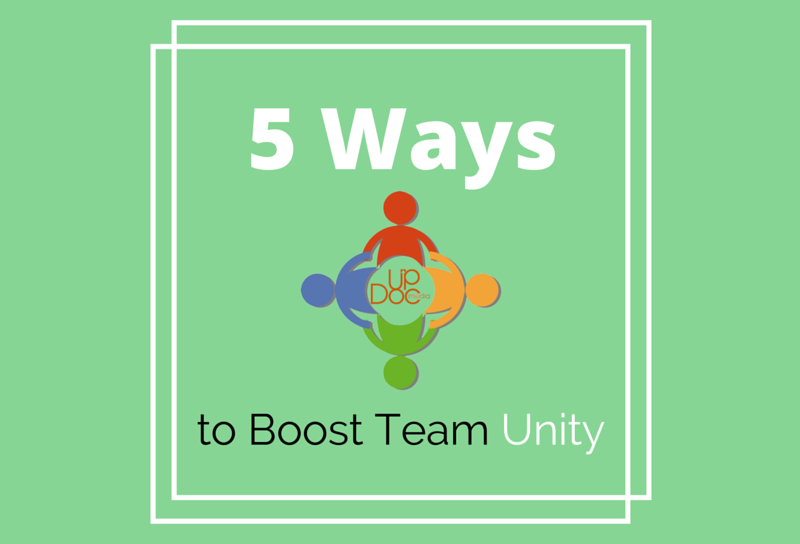 So, all this week, we’ve talked about how many ways companies can mess up their culture and how management can totally stink. Well, it’s high time for some positive talk! Today, we’re closing this week’s blog series with five savvy ways of boosting team unity. Ultimately, leadership is not only a characteristic required for success, it is also a virtue which most require of their managers.

1. Start with commonality.
It is easiest to unify a team by focusing on what everyone has in common. It may sound easy, but the truth is, unifying across a commonality is far more complex than it may seem. If you were to go out into any industry or profession and ask what ties them together in unity, you are likely to get all sorts of different answers. The lesson here is that just about every individuals who is part of a team identifies differently. Therefore, it is important to make the identity as a team the commonality shared.

2. Follow with common goals.
Once an identity is forged, it can be further strengthened by a common goal. The most extreme version of this is “my enemy’s enemy is my friend.” As it pertains to the team and the individuals who may require more buy in, focusing on common goals is a way to start leading the team in the same direction. As the team draws closer to the goal, the individual parts will also draw nearer in unison. This second step requires grit, perseverance, and guts — the going is typically tough during the early stages.

3. Use the best combination of pieces for the best combination of tasks.
This about this step like playing chess. Not so much that you are to assign teammates as pawns, kings, or queens. Rather, that every piece in chess has a significant role, ability, specialty, strength, weakness, and situational if tactical utility depending on the timing of the game. This is precisely how a team can become unified. As the team has already made their determination upon their goal, a good leader can draw the team further in unison by empowering those best suited for each task along the way to show off their excellence. Basically, this is a game of playing up strengths, particularly that of combined strengths — much like in chess when a power piece is supported by yet another power piece.

4. Regularly recognize & reward excellence.
As the journey deepens and victories are shared, it is crucial that leadership regularly recognizes, rewards, and praises the team and the specific roles that were played out. It is important not to monopolize the credit and to disperse it equitably. After all, by this time, a team already knows who is doing what as well as who deserve what type of praise. Therefore, by giving regular and well deserved boosts to the team, they will only fight harder for each other as they strive for the goal.

5. Promote inter-dependent autonomy.
This is perhaps the best millennial based management strategy in the coming age. Leaders need to teach teammates to rely on each other rather than relying upon management. Management is more a function of coordination these days; leading, inspiring, cultivating, and empowering the team towards excellence. A manager who is a leader and refuses to be a task master is one who will empower the team to rely upon each other. To make up for each other’s weaknesses while making even stronger each other’s strengths. Eventually, this becomes something far more than team unity — this, becomes an organization’s culture of success.

Team unity is the seeds of beginnings as it pertains to a company and its culture of success — or, it’s culture of woes. Senior staff, operational managers, mid-level bosses, and c-level executives all play a critical part in ensuring that each business unit functions as a cohesive and unified team. And, that each team further is unified as it perpetuates into the perspective of the company as a whole being one large, collective team. Organizations that have instilled such a culture reap long term rewards in areas of performance, talent acquisition, and ultimately… create for themselves a sustainable competitive advantage across people who are willing to learn from each other, fight for each other, and win.