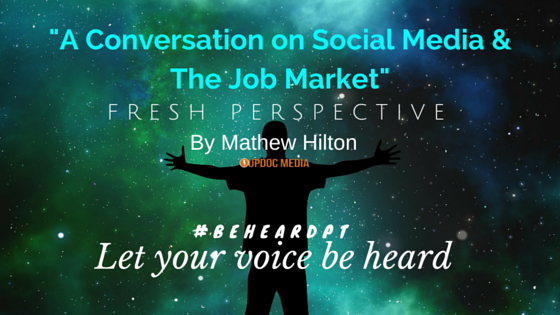 Here’s the backdrop of this conversation: After purchasing UpDoc Media’s DPT Career Primer, Mathew & Ben began to engage in some online dialogue to reflect on how networking for jobs has changed in its very nature. As the conversation expanded, it became obvious that the content was going to be helpful to many more. So, we did our best to storify our chat into a conversational-two-way-style-Q&A. Here is (kinda) how it went down 😉

Ben (B) to Mathew (M): How has your view of social media changed for you as you entered your DPT program and are approaching graduation into the job market?

M: Several weeks ago, my DPT program hosted a job fair with dozens of physical therapy clinics, hospitals and rehab centers. Many of my classmates and I printed out a few resumes, but didn’t know what to expect. We felt that graduation was way out of sight and that this was mostly for the 2nd year DPT students to benefit from. To my infinite surprise, after talking with the very first recruiter for a large hospital system, we were asked to connect with her through LinkedIn. Wait… physical therapy employers actually use LinkedIn? This was a big eye opener for me that I needed to start seeing the job hiring process beyond the traditional resume → interview → employment progression.

Mathew to Ben: Ben, I know from your articles and podcasts that you worked previously as a rehab director. How did you use LinkedIn and other forms of social media in your hiring process?

B: When I was hiring, the first thing I did when a resume crossed my desk was looking up the candidate on social media. Typically, I wanted to first see if they were on Twitter. I assumed they were probably on Facebook; a profile which was probably private to friends & family. Finally, I’d look to see if they were on LinkedIn as a verification process to “their story.” In essence, LinkedIn was my reality check with what was on their resume and who they said they were.

Ben to Mathew: Which social media outlets did you use first? When did you jump on Twitter & LinkedIn?

M: I started a LinkedIn profile in 2014 because I was graduating from college and planning on taking a gap year, therefore I needed a job. So, I started a profile with the thought that it couldn’t hurt my job search, but I did not make any serious efforts to fill everything out. At this point, I didn’t really believe that LinkedIn would factor into my gap year job search.

For Twitter, I actually started one last week and I was actually sold on the idea from your DPT Primer through UpDoc Media (mission accomplished Ben)! In the past, I never really considered using Twitter because I felt that it was mainly for celebrities, but you made a strong case as to why physical therapists and students should have one.

Mathew to Ben: One of the big reasons that you advocated for students to start a Twitter was that you heard about SPTs securing jobs through Twitter. Can you share a story on how it happened?

B: Sure! So, without causing too much positive finger pointing… there was a generation of DPT students a few years back who were VERY involved on Twitter. They had regular chats, were super engaged, and regularly interacted with clinic owners, thought leaders, and the like. As graduation loomed around the corner, some of these students started to conversate about where they would be looking for jobs. Eventually, some of the regular interactees (who were clinic owners) sparked some conversations. Conversations lead to interviews. Interviews lead to offers. Offers led to employment. Essentially, the consistent presence and discourse via Twitter connected pre-grad candidates with clinic owners who were looking to expand. The timing was perfect and led to these grads cutting the proverbial line in the job markets; becoming directly injected into an employment opportunity.

Ben to Mathew: What have you been told about social media? What are some taboos that school, CIs, and clinical sites have told you are utter taboos?

M: My school provided a brief discussion about social media that reflected the APTA’s position on social media, mainly about protecting patients and professionals. Though well-intentioned, it made me feel pretty averse to developing my professional online presence. With all the risks involved, was it really worth it to start a Twitter or professional blog?

Mathew to Ben: For someone who is new to Twitter or social media, what would you say are some Twitter faux pas that newcomers should be aware of (other than APTA’s guidelines)?

B: Every social media has a different feel, style, and culture. For Twitter, it is best to keep things very positive and constructive. Twitter is a BAD place to host arguments or even civil debates. Leave that for private Facebook groups, forums, or ideally… in private email threads. Twitter is a place to connect, share ideas, construct solutions… together. The feeling of cooperation and collaboration over intra-group competition is vital to successful engagement on Twitter.

For Facebook, the feel of this social media is much more personal. Many people use Facebook to connect with people they’ve already met in “real life,” where Twitter & LinkedIn is a way to connect with people you’d like to meet in person. Therefore, things on Facebook can get personal very quickly… and, it can get ugly if not tamed for the same interactions one would otherwise have in person.

As for LinkedIn: LinkedIn has become a new way of virtually shaking hands. It’s a pre-meet, meet. It’s understood the any reaching out is of a business nature on LinkedIn; therefore, it goes both ways that messages are likely of a sales nature, yet, it is welcome and accepted.

Ben to Mathew: How has the use of social media in the job market surprised you?

M: I think that as a millennial, I grew up using social media for purely social purposes. Now that I’m in school to become a professional, it’s a bit strange that I’m now transitioning into using these same platforms for things like networking, promoting the profession and eventually acquiring a job.

As a DPT student, I would always hear that the job market is great, that we’ll all have numerous job offers when we graduate. As a Southern California native who is attending school on the east coast, I just assumed that by the time I graduate and acquire my license that I would just need to email my resume to a bunch of California PT clinics and then wait for the job offers… obviously, I know that this is far from the truth. I’ve learned that networking is crucial and social media plays a big role in that.

Mathew to Ben: For someone like myself who is looking to expand their professional network, how do you think students and young professionals should use LinkedIn? What is the general etiquette?

B: LinkedIn is best used as a social proofing when connecting with others that you know, know of, or would like to know. It’s basically a pre-meet, meet. You can use it a resume builder & verifier. And, it’s also a good place to post your own content as further proof affirmation to your expertise and fit for any recruiter or hiring manager. Generally, people tend to message through LinkedIn and discuss further via email if things get interesting. That way, there isn’t this sense of intrusion from a cold email as much as it is an expected “cold” message via the LinkedIn system. LinkedIn is still evolving in terms of culture, etiquette, use, etc. It’s becoming one of the biggest business to business platforms. However, it isn’t quite there yet in terms of business to customer. Only time will tell.

Ben to Mathew: What words of wisdom would you share to a class of 1st year DPT students regarding social media, the job market, and/or life in general?

M: I would say that it’s important to broaden our perspective from seeing ourselves as students to also see ourselves as emerging professionals. In addition to working hard in the classroom and clinic, we need to also develop our values, interests and branding. While the job market appears strong for our profession, I’m finding that many first-time jobs are secured through a viable professional network. Building this network through nontraditional spaces like LinkedIn and Twitter seems to be the growing trend and it’s important that we learn how to use social media effectively to best expand our opportunities, connect with others and advocate for the profession.

Mathew to Ben: For someone reading this who is thinking about starting a Twitter, what would you say are some growth tips or beginner must haves for Twitter?

B: The biggest growth tip for Twitter is to join in on the conversation. While it is rather common to lurk, talking is what will connect you with influensters. It’s also helpful to create lists (public or private) of people you wish to follow. It is easy to follow hundreds and thousands of people… and, suddenly, not be able to keep track of the conversations. I tend to keep people on private lists so I can keep track of where the talk is going. Also, it is important to utilize hashtags (both in posts and in browsing). Through these tips, you can better manage the storm of content that is Twitter while engaging in an authentic, timely, and positive manner.

Some Closing Thoughts From Ben:
Just as the job application process has becoming increasingly digital, uses keyword processing to analyze entire applications (including cover letter, resume, CV, additional documents, etc), the time will come when entire job applications will basically consist of one click with an API access which will aggregate, analyze, and otherwise decide if you are a good fit exclusively based on your digital footprint. After graduating from UCLA in 2014 with a physiology degree, Mathew worked as a manager for a large CPR Training Center in California. Then he made the big leap to move across the country to pursue his DPT at the University of Delaware. He is passionate about mentorship and has started a company called Health Grad Advantage to guide students on their paths to become future healthcare professionals. In his free time, Mathew enjoys cooking, hiking and exploring the east coast.