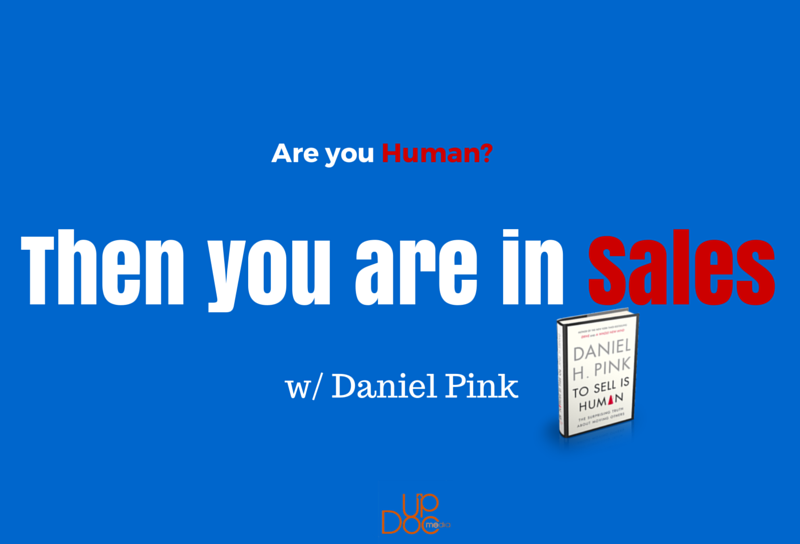 Therapy Insiders
Are you Human? Then you are in Sales w/ Daniel Pink Are you human? I’m hopeful you answered yes. And if you did, in fact answer yes, then you are in sales. Every single day you sell. Don’t believe me? I’ll prove it to you. Last night when you tried to convince your significant other to change the channel to what you wanted to watch, guess what, you were selling. How about last week when your cable bill went up 1000% all of a sudden, and you called them to figure out what went so horribly wrong…you were selling. When your patient is sitting in front of you and you are educating them on the benefit of exercise, yet again you are selling. Here is the important part. Are you ready? Pay attention. Selling is normal. Even more, it’s fundamentally human.

The idea that we are all in sales is not new. It is the basis of one of my favorite books–To Sell is Human by our Therapy Insiders podcast guest Daniel Pink. I’d be remised if I didn’t mention Dan’s TED talk which I strongly recommend you watch (you can check it out here). In it, Dan covers business and workplace motivation topics.

Let’s get back to selling. Why is selling perceived negatively? And it is. Don’t kid yourself. It could be due to a negative experience with a car dealer, or a negative portrayal of a salesman (or woman, but typically man) in a TV show or movie or…?

In actuality, selling happens all the time whether it’s sending emails in hopes of a response or pitching on Shark Tank. We don’t interpret these daily tasks negatively because we are focused on the outcome and therefore we are biased in our actions.

Now that you’ve accepted that selling is part of being a human, you want to know how to get better at it, right? At the end of the day the best agreed upon deals benefit both parties. How can you better your selling skills? What are some extremely effective strategies? What does Pixar have to do with selling? For those answers and more start by listening to our podcast and finish by reading Dan’s book!

Therapy Insiders is sponsored by WebPT: The ultimate EMR for physical therapists. Want to know why they are the ultimate? Want to learn more about ICD-10? Yes, yes you do! Check out WebPT.com/podcast and find out the latest information about ICD-10 and much more. Want a free demo? Of course you do! Give them a call at 866-221-1870!

Daniel H. Pink is the author of several provocative, bestselling books about business, work, and behavior. His latest is To Sell is Human: The Surprising Truth About Moving Others, which uses social science, survey research, and rich stories to offer a fresh look at the art and science of sales. To Sell is Human is a #1 bestseller on the New York Times, Wall Street Journal, and Washington Post lists and is being translated into 27 languages. More than a dozen outlets, from Amazon.com to The Washington Post, selected it as one of the best books of 2013. It also won the American Marketing Association’s Berry Book Prize as the year’s best book on marketing.

In Drive: The Surprising Truth About What Motivates Us, Pink uses 50 years of behavioral science to overturn the conventional wisdom about human motivation and offer a more effective path to high performance. Along with being a Wall Street Journal, Boston Globe, Los Angeles Times, San Francisco Chronicle, and Publishers Weekly bestseller, Drive spent 159 weeks on the New York Times bestseller lists. A national bestseller in Japan and the United Kingdom, the book has been translated into 32 languages.

A Whole New Mind: Why Right-Brainers Will Rule the Future charts the rise of right-brain thinking in modern economies and describes the six abilities individuals and organizations must master in an outsourced, automated age. A Whole New Mind was on the New York Times bestseller list for 96 weeks over four years. It has been a Freshman Read at several U.S. colleges and universities and has been translated into 24 languages.

Dan’s first book, Free Agent Nation: The Future of Working for Yourself, was a Washington Post bestseller that Publishers Weekly says “has become a cornerstone of employee-management relations.”

His articles on business and technology appear in many publications, including the New York Times, Harvard Business Review, Fast Company, Wired, and The Sunday Telegraph. (See a sample of articles here) Dan has provided analysis of business trends on CNN, CNBC, ABC, NPR, and other networks in the U.S. and abroad. And he lectures to corporations, associations, and universities around the world on economic transformation and the new workplace.

He is also host and co-executive producer of “Crowd Control,” a new television series about human behavior on the National Geographic Channel.

Dan’s TED Talk on the science of motivation is one of the 10 most-watched TED Talks of all time, with more than 19 million views. His RSA Animate video about the ideas in bis book, Drive, has collected more than 14 million views.

Before venturing out on his own 18 years ago, Dan worked in several positions in politics and government, including serving from 1995 to 1997 as chief speechwriter to Vice President Al Gore.

He received a BA from Northwestern University, where he was a Truman Scholar and was elected to Phi Beta Kappa, and a JD from Yale Law School. He has also received honorary degrees from the Pratt Institute, the Ringling College of Art and Design, and Westfield State University.

Dan lives in Washington, DC, with his wife and their three children.